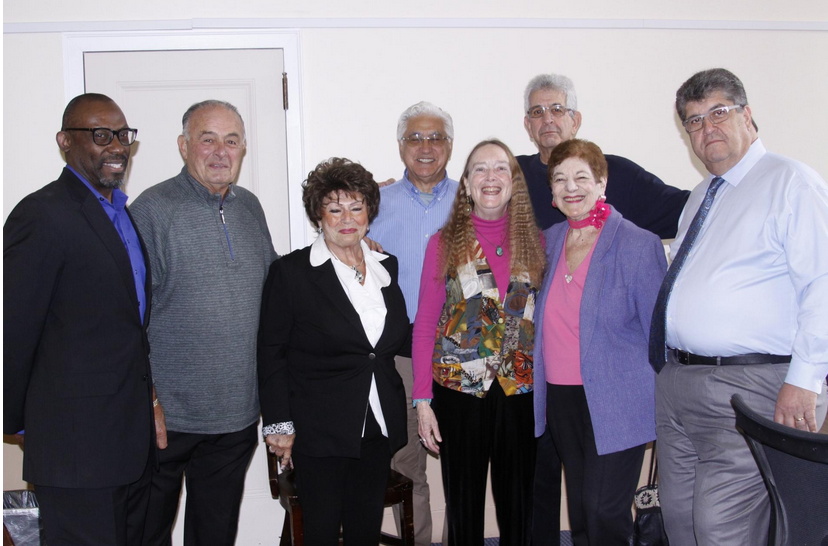 Visit the Photo Gallery from the kick-off event at Medford City Hall!

Sharon Kennedy has always had a passion for storytelling.

“I enjoy making people laugh and making people think,” Kennedy said. “I like performing. But on the other end, I like being completely quiet and listening to people tell me their stories.”

As a professional storyteller, Kennedy travels around the country “telling folk tales and fairy tales” to children and adults at schools, festivals and libraries. In addition, she also writes oral histories of people’s lives and loves learning about the individual she interviews.

″[I enjoy] listening to people tell me their beautiful, heartbreaking, spellbinding stories of their families,” Kennedy said.

Kennedy is continuing her passion for storytelling and oral history in her latest project, an oral history on Italian-Americans in Medford. She held a kick-off event for the project this past Tuesday at City Hall, and she is excited to begin the interview process.

For her latest project, she received a grant from the Medford Art Council to interview different Italian-Americans and write pieces about their stories for the Medford Transcript. Last week, Medford Mayor Stephanie Burke, Diversity Director Neil Osborne and around eight to 10 Italian-Americans all showed up to support and learn more about the project.

“I love the idea of Sharon highlighting the real life stories of Italian-Americans in Medford,” Burke said. “It is so important to chronicle their experiences for all to see.”

“The Mayor has been very supportive of this project,” Kennedy added. “I’ve been laying the ground work for several years.”

After some coffee and Italian pastries, Kennedy gave a brief overview of what oral history means, the goal of the project, what she is going to do and why she thinks her work is important.

Such a project is important as time goes on, Kennedy said.

“We want to do this because we might lose this history and we might lose these stories,” she continued. “People of Medford should know the history of Italians in the city. As far as I know, these have never been collected.”

Kennedy said she will interview Italian-Americans with “roots” in South Medford, and she will learn about people whose stories go back even before 1930. She has found one person from that time period, but she said most of the people will be from 1930 to 1980.

Kennedy said she really wants to preserve the culture and stories for the Italian community.

“I’d like for the Italian community itself to be able to have these stories about preserving their culture, preserving their traditions passed down to their children and their grandchildren,” she said.

At the event, Burke and Osborne both spoke and showed their support for Kennedy’s project, and Kennedy interacted and chatted with the Italian-Americans to get their input about what direction she should take with the project and who she should interview.

Kennedy found the different Italian-Americans who showed up to the kick-off event by talking to different people in Medford, and she will interview some of those individuals for the project and some others who they recommend to her, such as their family members.

Kennedy will write four to five pieces over the upcoming months about her conversations with the Italian-Americans.

If anyone wants to be interviewed, Kennedy said people should reach out to her, and her website is sharonkennedy.com.

“We are looking for people to interview, especially if their families came to Medford before the 1930s,” she said.

Kennedy is also still looking for money to pay for a celebration at the end. During the celebration, she wants to tell someone’s story, have someone else share his or her own story, and perform an actual oral interview in person.

“I am still looking for funding if anybody has it,” she said. “We need about $600 to have a presentation and a celebration at the end, which would be a gathering together of the eight people that I interview and another dozen people I meet along the way.”